Thanks to Simon (Sam) Hulse’s introduction, I discovered the amazing joy of skiing deep powder snow in the Canadian Rockies, we went for three years in a row and we had three fantastic trips. The middle year of ’93 is when I named a run Kandahar in the Monashee mountain range, it is famed for deep snow, steep runs and great tree skiing.

The Head guide there, who sadly died more than twenty years ago, was called Dominic Neuhaus, we had met him the year before in the Cariboos. He had originally hailed from the Berner Oberland and I was very pleased to read this autumn, after Charlie Brooksbank of Pure Powder had kindly sent me a map of the Monashees, that following Dominic’s premature death from natural causes, they named a run after him.

But back to the Kandahar run, on our penultimate morning we flew 10km north to ski the Mount Nagle area. Our guide Bryan Keefer told us that our first run of the day was rarely skied. The run was superb, it started with a large powder field, similar to Mürren’s Kandahar run, this was followed by a collection of meadows rather similar to the runs from the Schiltgrat that pass just to the side of Schiltalp, this was followed by a steep gulley to the forest below, not unlike a long version of Martha’s meadow. I shouted across to Sam at the bottom, that we should suggest to Dominic that the run should be called Kandahar! Dominic liked the idea and the Canadian heli-skiing run of Kandahar was born. I must go back and ski it again one day.. let me know if you get there before me! 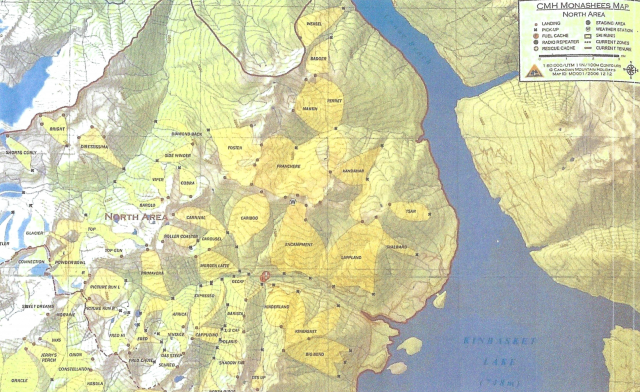