The Kandahar is one of the world's great sporting clubs, founded by British skiers, including Arnold Lunn, in the Swiss resort of Mürren in 1924 to promote the new sport of Lord Hunt with Arnold LunnAlpine ski racing.  Nearly a century on, with an international membership of 1400 plus, it is more active than ever: training, sponsoring and supporting young racers; providing race training for adults and bringing members together by organising races and social events in Mürren and London.

The founding aim of the Kandahar was to raise the standard of British skiing and achieve official recognition for Alpine ski racing alongside the established Nordic disciplines of cross-country skiing and ski jumping.  Success in this was realised with the hosting of the first Alpine World Championship in Mürren in 1931 and Britain sent the first British team to the Olympics in Garmisch-Partenkirchen in 1936, captained by Peter Lunn.  From that day, many leading British racers have been Kandahar members. 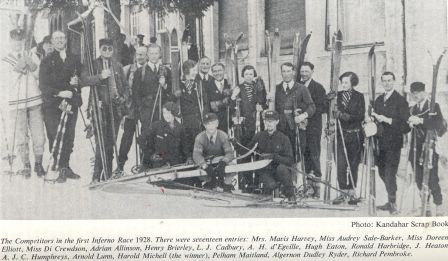 Membership is by invitation but the Kandahar is an inclusive and friendly club that welcomes applications from anyone keen to support or take part in racing.